Hello, fans of Auntie Lolo Crafts! My name is Celeste, and I'm sooooo excited to be here to share an easy, cheap party idea with you today! I'm nobody important, just a teacher and family blogger who happens to dabble occasionally in all things creative. But every once in a while, in between family and church posts, I have a good idea to share--free crochet patterns, recipes, recycled crafts, party ideas, etc. You're welcome to stop by anytime! Currently I'm at omadarland.blogspot.com, but on September 1st that URL will change to hereinthewaitingplace.blogspot.com. And now, without further ado, here's a LEGO PARTY for the kid in you!

Since I chose to go with a LEGO theme, for birthday week Paul had to search the house each morning for a giant LEGO (made with a kleenex box and milk jug lids spray painted red, thank you very much!); in the LEGO was a candy bar and small toy, along with a short message tied to the candy...he had a lot of fun finding the toys, and we both are STILL eating all the candy! 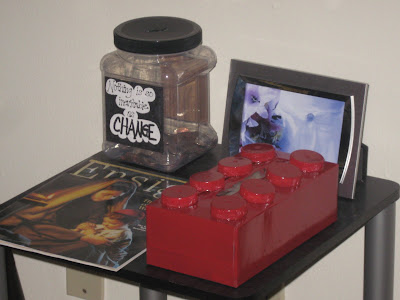 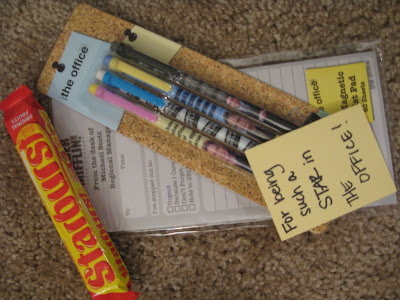 Since his birthday was on a Sunday, we went up to Chicago Saturday to kidnap his sister and visit the LEGOLand Discovery Center in Shaumburg. It was a lot of fun, even if we were a little old to be there! We got to play with LEGOs, 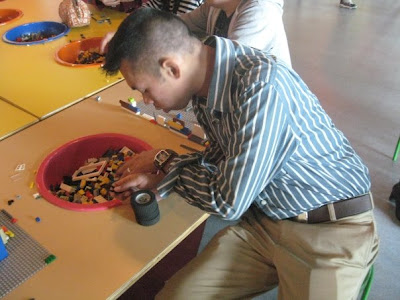 go on a dragon ride, walk through a LEGO jungle, 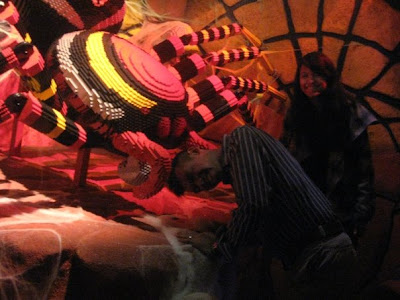 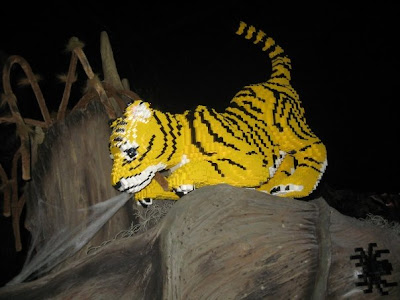 visit the "hall of fame" with famous LEGO-made artwork reproductions and famous figures, 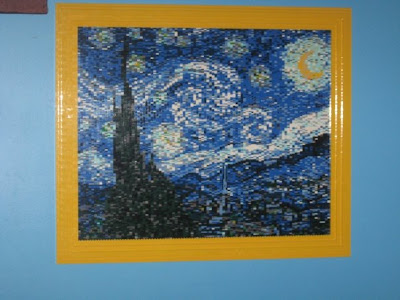 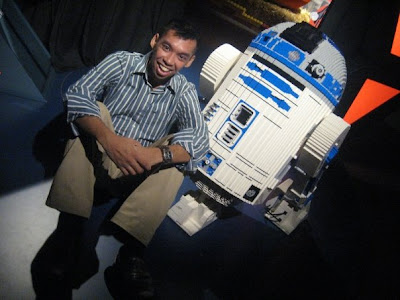 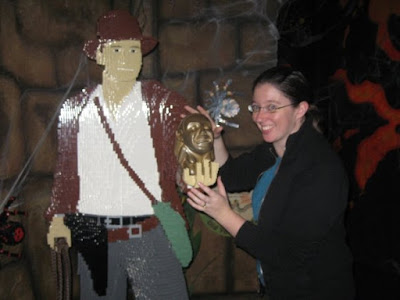 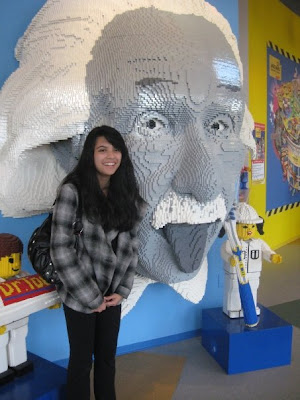 and visit the mini factory (did you know only 18 out of every MILLION LEGOs is discarded from a factory? Talk about quality!). We also got to see a miniature Chicago--very detailed and realistic looking, except for a Batman figure on top of the Sear's tower! 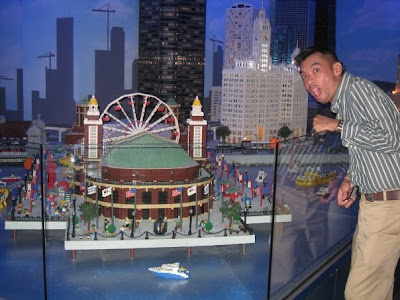 If you have any sort of LEGOland or its discovery centers nearby, GO!  It's worth it!
Then we went back to his folks' place and Paul visited, opened presents (like the Enterprise cufflinks and LEGO mp3 player from Emilie shown below!), and ate some Filipino food before heading home. 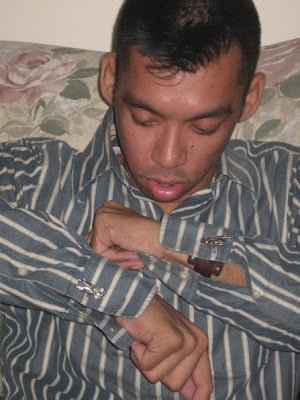 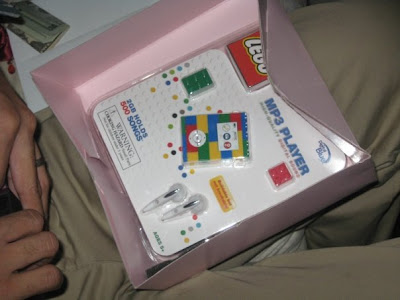 (P.S. There are a million and one different LEGO-themed gifts and prizes to buy if you go to the LEGO store HERE.)

That night, we started our "Happy Birthday, Moon" on birthday eve tradition--Paul found the birthday top hat, beneath which was about 10 pounds of LEGOs for him to play with! (And for us to use in the party the next day!) 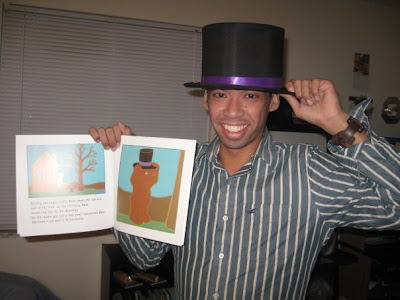 On Sunday, we threw a party after church with some of our wonderful friends. I learned how to make vegetable pancit, and we fried up some lumpia (two of my favorite Filipino foods), and after everyone was well-fed we played some games. We had "Guess How Many Legos are in the Jar?" and had a super-difficult LEGO quiz.  Some bold primary and green colored birthday decorations helped round out the table. 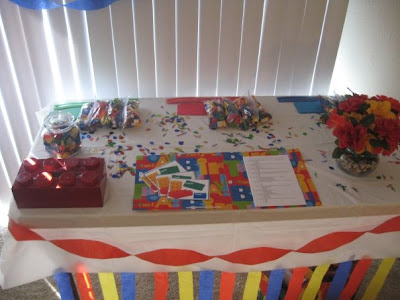 Then we had LEGO team building relays.  This was everyone's favorite part!  I made three stacks of identical "challenges," which included objects they had to build and the inches high it had to be (for example, in the picture below, the word "Paul" at least 3 inches tall...we also had planes, giraffes, tables and chairs, etc., at varying heights).  I backed each set of challenges in a different color, with a ruler to match, for each of the 3 teams, then shuffled them.  So, everyone's building the same things, but not necessarily at the same time.  One person from each team started off, and when they finished they had to take a picture of their creations with the rulers and then tag the next person to go build. 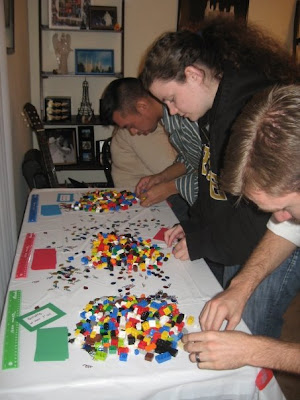 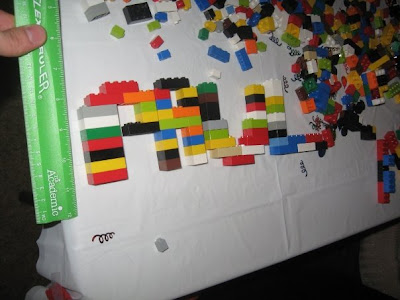 Then I split up the rest of the challenges into three different rooms.  We had LEGO tower races (build the tallest free-standing tower you can in 2 minutes), 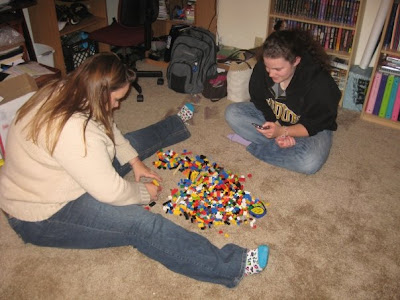 LEGO chopsticks (transfer LEGOs from one bowl to the other in 1 minute), 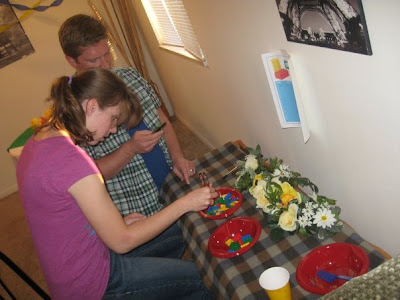 and a LEGO toss into bathroom-sized cups, with points at the bottom for you to add up. 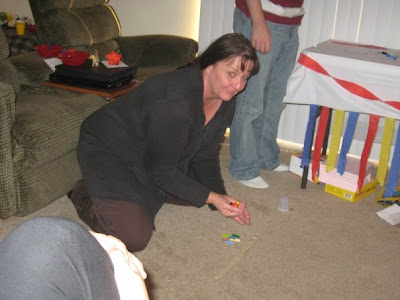 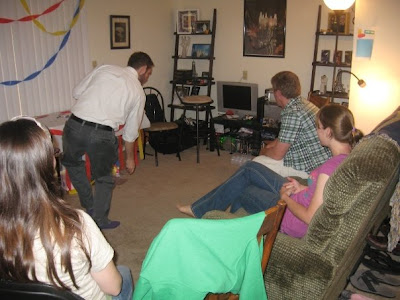 At each "station" was a paper to record your name and stats, like the height of your tower or how many chopsticks or the points you got.  It made finding the "winner" of each category super easy, and let them know what they had to beat, while still giving them time to have fun wandering around a bit and socializing in more intimate settings.  :)  We had a "closing ceremonies" and I awarded the winners for each game and the quiz and guessing game earlier with prizes--like the LEGO salt/pepper shaker, or LEGO post-it notes, or keychain, or magnetic frame (I made that one myself), etc.

Then we had cake--and with 25 relighting candles spread out over the entire table, it took the entire party to put out the flames!  (Excuse the crazy melty appearance, I'm not a cake decorator by any means and I'm afraid of fondant!) 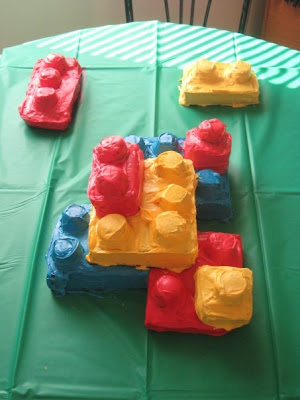 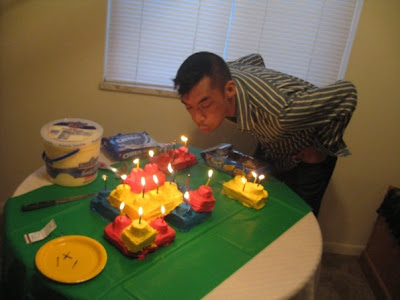 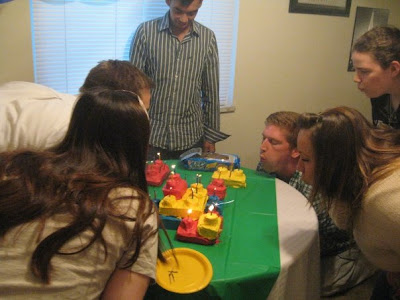 For this cake, I basically baked two 9x13" cakes and cut them into different sized rectangles (half the cake was the 2x3 LEGO).  I used mini muffins/cupcakes for the knobby parts.  Add some brightly colored icing, a green plastic tablecloth to put everything on, and voila!  Instant, easy (though time-consuming), affordable cake!
We ate, chatted, and played some more, with Paul opening gifts and having an all around grand time. The favors were some LEGO-like building block candy and some paper with crayons. People seemed to have a lot of fun reverting back to their childhood, as did we--it was nice to go back to the good old days of creative play. I had a blast putting the whole thing together, and now I'm looking through my birthday binder to try to figure out how to top it next year!
I don't know why I love birthdays so much...we celebrated them now and again at home, but growing up we didn't really make a huge deal out of 'em. But whatever the reason, I love them now, and I wish that we didn't always feel like the "fun" parties are just for little kids--as the LEGO party proved, you're only as young as you feel, and we all have a little child tucked deep inside of us.
If you want to see more pictures from the party, visit my facebook album!
Posted by Auntie Lolo at Friday, August 26, 2011