Hi there!  Sorry for the interruption, but this isn't Auntie Lolo...it's Lindsay.  Lolo's best friend :)  She asked me to do a guest post for her and so here I am!  This probably won't be the last time either....isn't this the best blog??? I just love it!  Okay, here I go...
For my son's 6th birthday party, he requested a spy party.  Now, in our house, my kids plan their birthday parties all year long...and it changes over...and over...and over again....  but I liked this idea, and so it stuck.
I found this amazing decoder invitation idea on Martha Stewart's website (thank you Martha!) and just tweaked the text to say what I wanted it to say.  I didn't want to spend any money on a special decoder lens, so I just bought some red cellophane at the craft store and made my own!  I used my circle cutter for the top and then just stapled it to my rectangle piece which I cut to resemble a magnifying glass.  It was really easy and the kids LOVED it!  I think it was fun for them to know a "secret" that no one else knew! 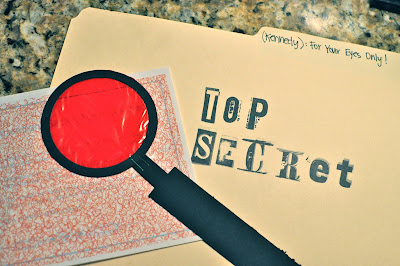 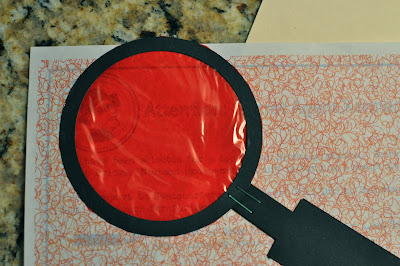 And what goes along better with spy's and secret agent's than mustache's??  I have been dying to use these, and it was finally my turn to hop on the mustache band wagon! 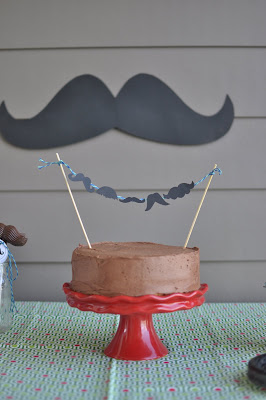 I'm also kind of crazy for cake banners--so I incorporated the two :)  My son got a kick out of it--none of the other kids even noticed or cared (Ha!) but that's okay--it's for my own enjoyment anyway :) 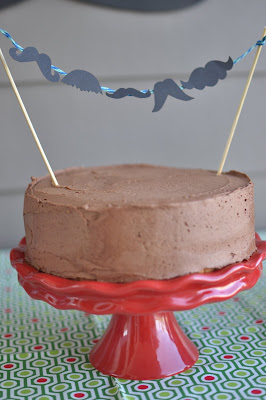 I tried to use mustaches as often as I could--just cause they're so darn cute! 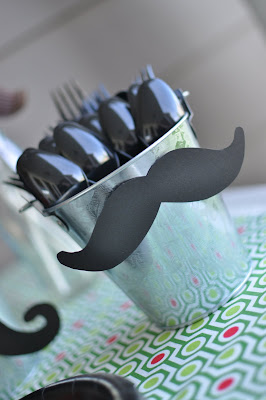 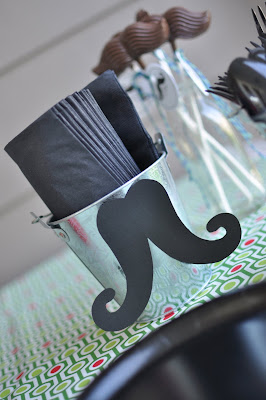 I kept the party food really simple this year--just cake and drinks! 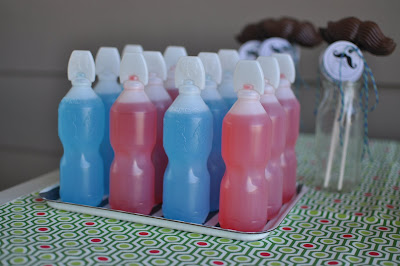 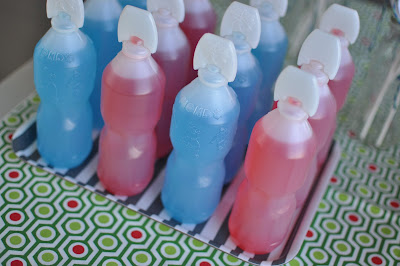 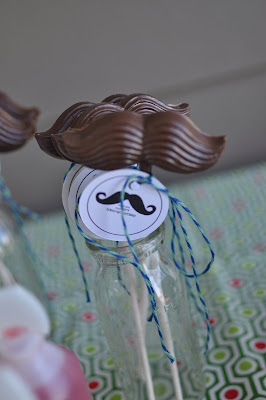 Oh, and chocolate mustache suckers!  Aren't they the cutest??  In case you can't read it, the tag says: "thank you.  from SPY HEADQUARTERS"--they were party favors for when they left. 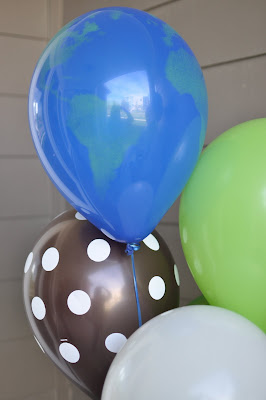 And what's a party without balloons??  Okay, I usually never have balloons (because I'm too lazy to go and get them and protect them from popping until the party starts...) but this time I ventured out a little.  Hopefully they were well loved and appreciated :) 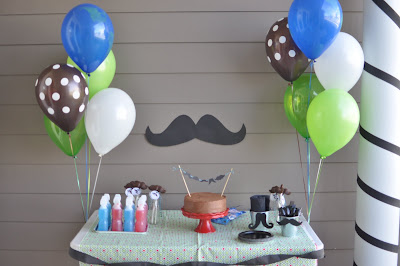 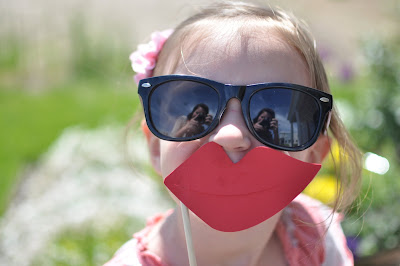 When the kids started to arrive, I had them check in at the Spy Headquarters--where I took their picture, their fingerprints (for their i.d. badges) and had them think of a codename for themselves.  I then issued them a pair of spy glasses and a water gun.  While the kids were playing one of the games, I ran (literally...) over to the computer and downloaded their pictures for printing, and then glued them onto the I.D badge... 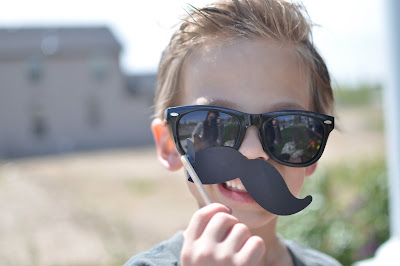 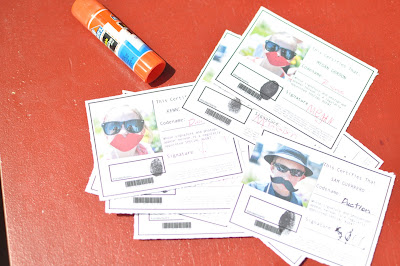 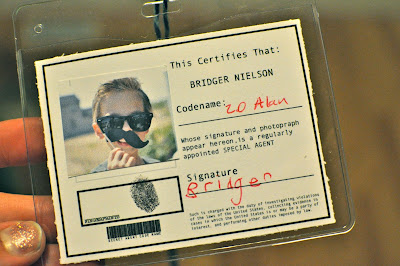 I picked up I.D holders at Staples.  I have to admit--it was kind of tricky getting these together while the party was going on.  My husband was here to help--but during the 10 minutes I was away printing these out--he needed my help 6 different times.  And there was fear in his eyes...  :)  All I'm saying is, it would be helpful to have some extra reinforcement. 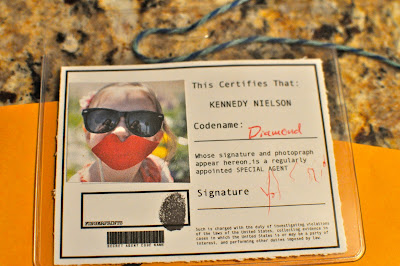 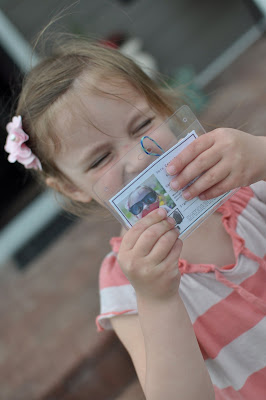 After Secret Agent check in, we informed them that their secret agent glasses could help them see dangerous laser beams.  We then took them over to our laser field (really...just red yarn :) )  and had them crawl under, over and through the beams. 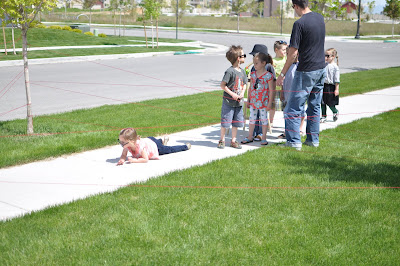 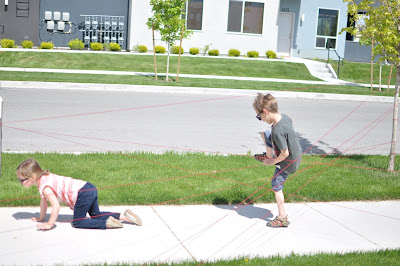 Then, we armed the kids with (small) water guns and told them to "find the target and shoot it!"  Of course, the target was on my husbands back!  They chased him all around the yard until finally, out of breath, he confiscated all of the guns.  Hee hee :) 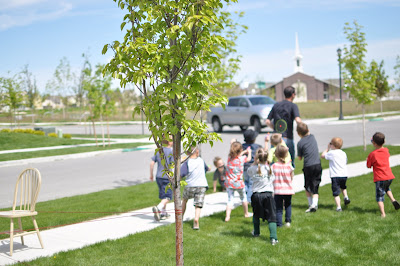 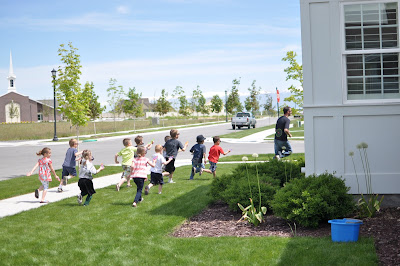 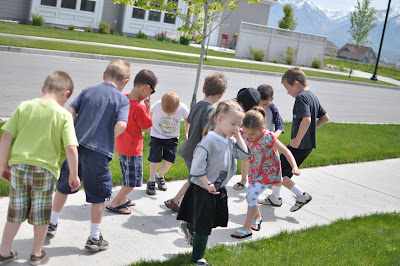 Next, we had the kids go through "defense practice"--they had to walk on the sidewalk without popping the snaps.  Yeah...that didn't last too long.  Maybe 15 seconds at best until they realized it was fun to jump up and down on them! 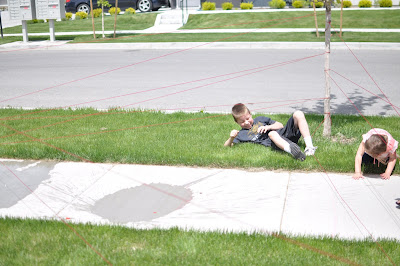 Sooo....we took them back through the laser beams.  But this time, we threw water balloons at them.  Yes.  Sweet Revenge!  (don't worry--they loved it!) 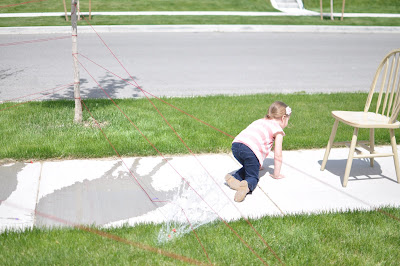 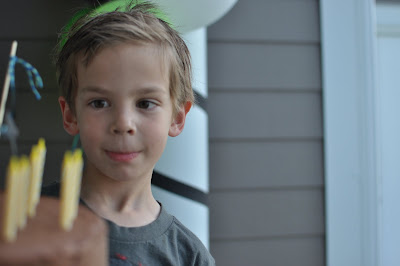 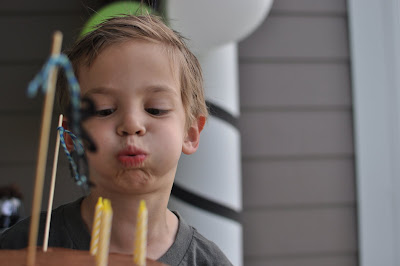 After we wore them out....we sugared them up!  And then we sent them home with all their treasures!  Their secret agent spy kit was packed with their I.D badge, sunglasses, water gun and their chocolate mustache sucker!  It was a fun party!  But the secret to a really great party, is the nap you get to take afterwards! 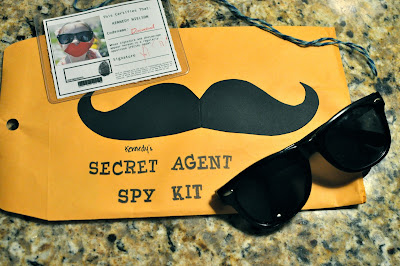 Thanks Lolo for letting me post my spy party on your blog!  And sorry if I spelled "mustache' wrong...I guess I could look it up...but again, I can be kind of lazy sometimes :)