Hi! I'm Kodie and I have a little blog called Cheepmomma where I share my sewing, decorating and entertaining ideas, along with my latest thrift and vintage store scores. I also tend to sneak in pictures of my kiddos, Haven and Maelie and their Cheepdaddy (my hot hubs, Adam). 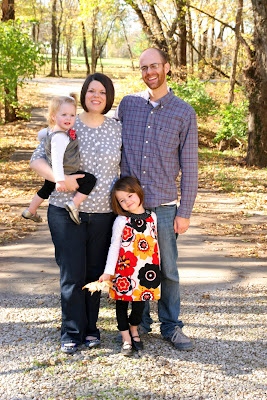 I also manage to sneak in the occasional gratuitous pic of my Boston Terriers, Frank and Lucy. :) But today, I'm sharing some pictures from my daughter Maelie's second birthday party.
For my kids' birthday parties, I always try to personalize them as much as possible. I think it will help me (and them!) remember what they are interested in during that year of their life. Over the last couple of years, we have had a turtle party, an elephant party and a dinosaur party. All were very memorable (and not very girly, come to think of it!) indeed! Maelie's obsession as of late has been Shaun the Sheep. If you are not familiar, Shaun the Sheep is a spin off from Wallace & Gromit, the ever popular and oh-so-adorable British claymation duo.

(image from here)
Isn't he cute?!? Who couldn't love those skinny little legs? Well, Maelie was obviously quite smitten with him and since her 2nd birthday was fast approaching, I decided that the only option was to throw a Shaun party. The problem? I couldn't find ANYTHING Shaun related in the US. I even live a mere 30 minutes away from a British import shop that is the biggest seller of Shaun related items in the US, but when I contacted them, I learned that there had recently been a halt on their ability to get Shaun items from the UK. (Insert much weeping and gnashing of teeth here!) So I decided to make everything for the party myself.
While my kiddos are young, I am trying to do small family parties at our house. My aim is to keep as much of it homemade and thrifty as I can, but still attempt to get a lot of bang for my buck. I always hand make my invitations - I just like the look of a cute little hand made invite on my fridge! And I spent quite a bit of time on these invitations... 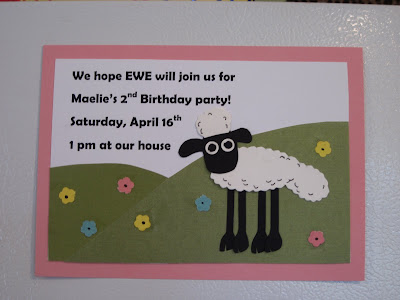 I printed out an image of Shaun, traced around his little body parts and recreated them with cardstock. I started seeking out any sort of sheep related items for the party favors for Maelie's 5 cousins that were coming and ended up finding some cute little notebooks and pencils from Michael's dollar bins that had sheep on them. 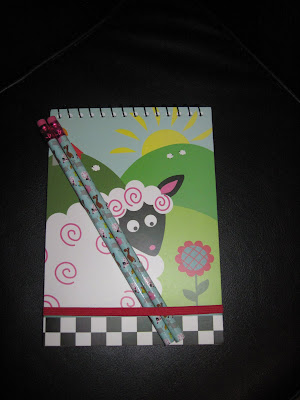 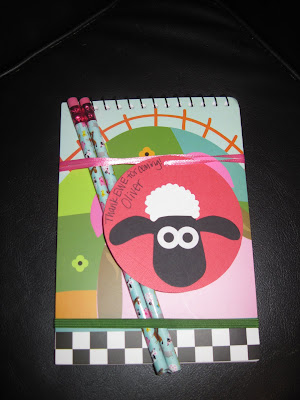 I also threw together a really big paper birthday banner... 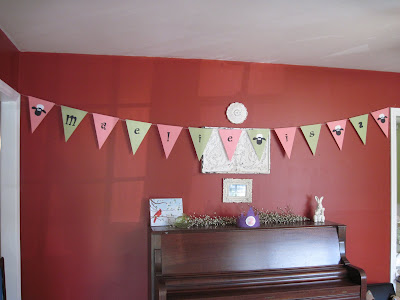 And made a bunch of these little guys to hang from the ceiling... 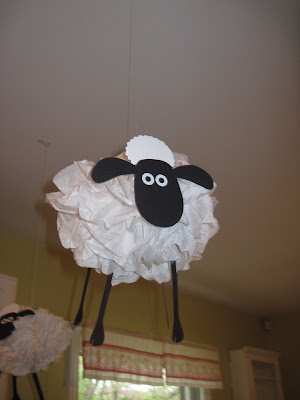 I just used Martha Stewart's tutorial on tissue pompoms and then cut out little Shaun legs and faces to tape on. They were a huge hit! In fact, she still has a couple hanging up in her bedroom!
And what's a party without a cake? I am not a cake decorator by any means (although I would LOVE to be!), so I called in some help from a friend who is (hi Lisa!). She totally nailed Shaun! I couldn't believe how perfectly she recreated him! 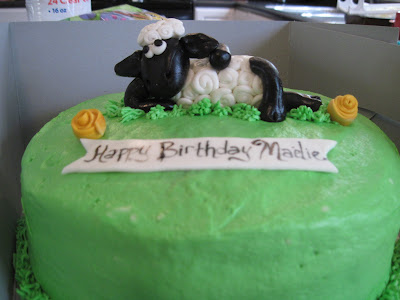 Isn't he adorable? Love him! Of course, Maelie wouldn't let anyone touch him! She was very concerned that he was going to be eaten! For the rest of the food, I served ice cream, cupcakes, whoopie pies, carrots and celery with dip, pita chips, pastel colored M&M's, pink lemonade and cherry limeade sodas. 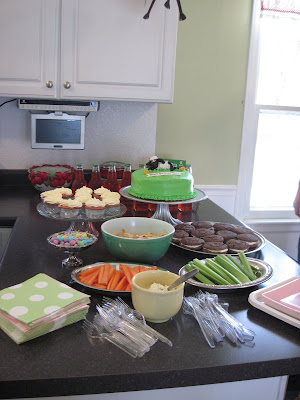 We didn't have any games, but we did let the kids watch a Shaun the Sheep short. We were attempting to keep things pretty short and simple for this party because we were moving the next day. Oh, did I forget to mention that? :) It was a pretty chaotic time! But I'm so glad that I took the time to plan and throw a unique party for a really unique little girl. And in the end, I was able to find ONE Shaun the Sheep item on eBay! She was immediately in love! (And we have rarely been able to pry it from her hands since!) 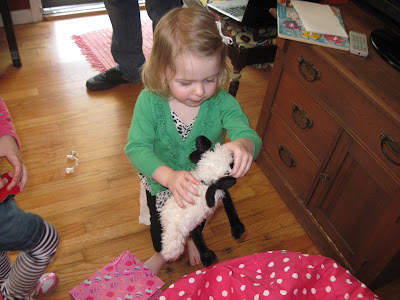 She was in love with her "Baa"! She loved her party - she would get so excited when she would notice something else that looked like Shaun and it was so fun to see her excitement! I don't think her obsession with Shaun is diminishing, so we just might have to have another Shaun party next year! Thanks for reading and thanks to Auntie Lolo for letting me share my Shaun party ideas!
Posted by Auntie Lolo at Friday, September 02, 2011