Happy Friday Auntie Lolo Crafts readers! I'm Mary Kathryn from Mathews Family Happenings and I'm back today to share my son's Star Wars lego party with you! Take a look:
just wanted to take a moment to show you how incredibly simple it was to throw a
whang-bang-awesome-everyone-had-a-great-time-and-it-didn't-cost-a-fortune-like-on-that-TLC-reality-show kid party.
and also...
deets = details
(just in case)
Here's the run-down on what we made:
(we being the hubs, Aunt C, and myself)
1) invites- 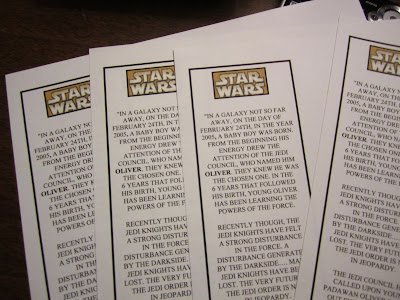 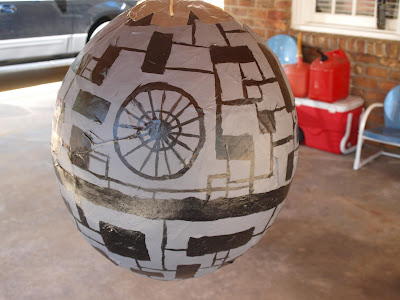 *it had been quite a few years since I'd paper-mached anything, so I googled the recipe.
I went with 1/2 cup flour + 2 cups cold water because that seemed to be the most popular.
That worked great for us, but I did 2 complete layers since I knew little boys would probably whack through one layer fairly quickly.
oh what a good call that was
to make this we used one of those giant 'bopping' balloons with the string attached (bought in a pack of 8 at Target for around a buck fifty), a sack of flour from Wal-mart  (1.64), and water (from our faucet). The paint came from our stash, so that part was a freebie.
total cost = 3.14 (+ the cost of whatever goes inside) 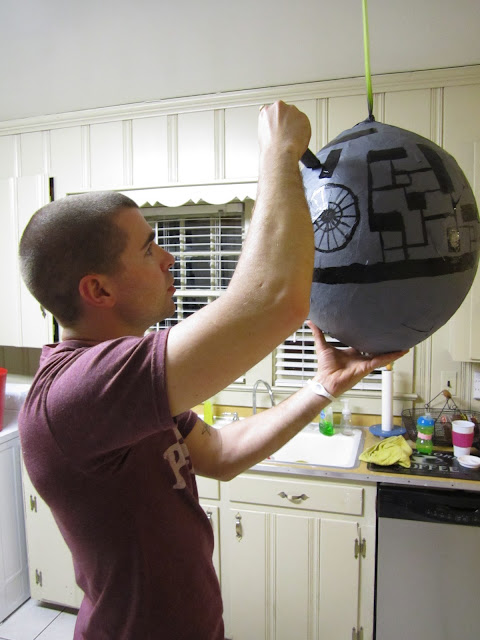 once again, I have to give props to the hubs for his detail work on the paint job
3) light sabers- 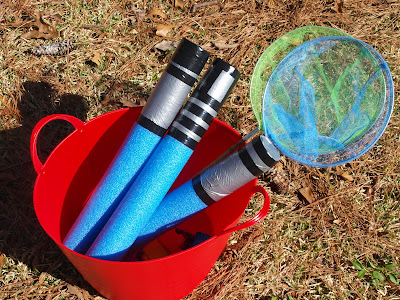 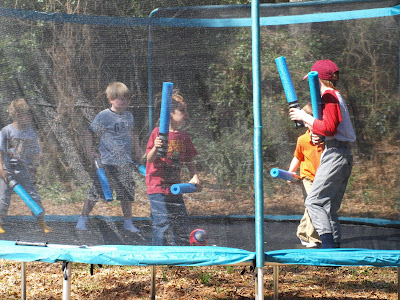 as you can see, they were a huge hit.
(pun intended) 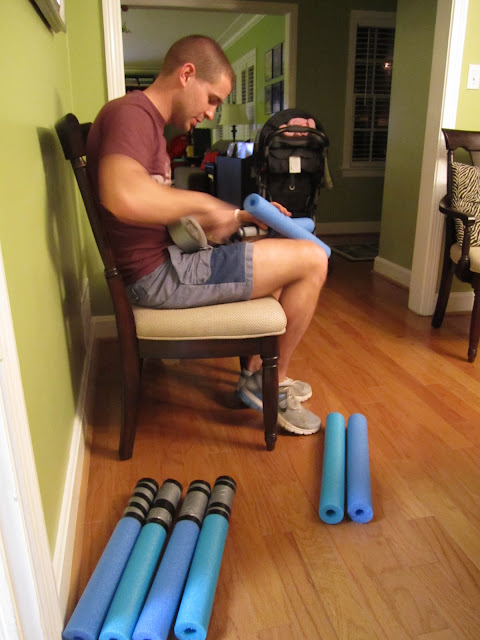 and here's the hubs, slaving away.
(actually, I think he really enjoyed it)
*we bought the swim noodles at Target (1.99 a piece), cut them into thirds, and made handles out of silver duct tape and black electrical tape.
He even went a step further and made different patterns on each one.
crafty, eh?
total cost for sabers = 5.97 (which made 9)
4) lego Star Wars character sign thingys- 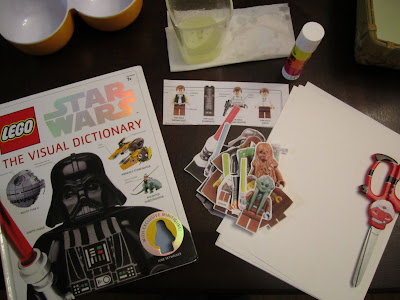 since O specifically asked for a Star Wars LEGO party, I wanted another way to incorporate the legos (other than just dumping a ton of them into glass containers as decor)
*I took his lego Star Wars book, copied several pages onto white cardstock, cut out the characters, and hot-glued onto some wooden dowels to stick into the food/lego containers 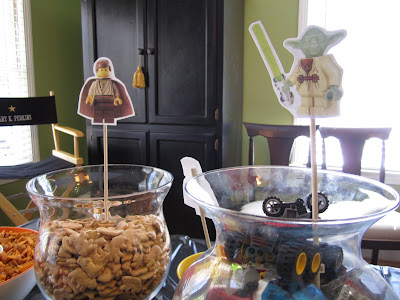 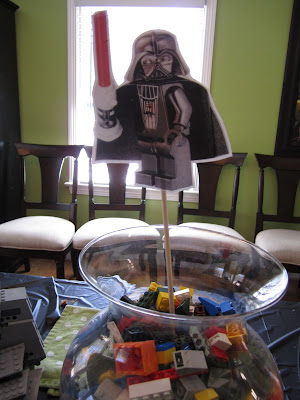 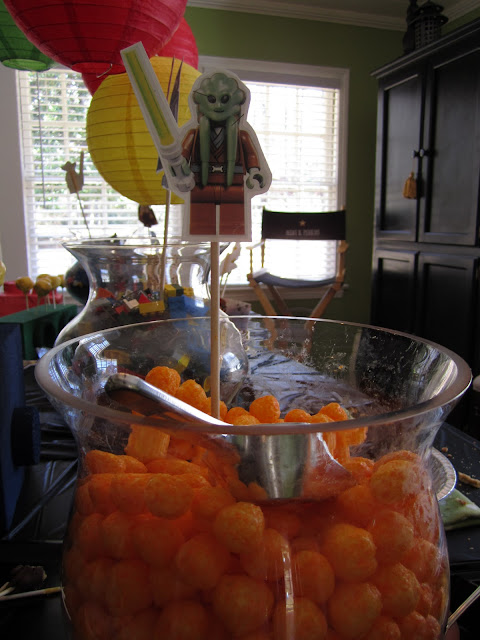 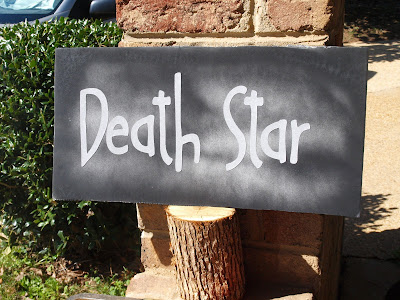 I know these totally weren't necessary, but I wanted them- mmkay?
*I found this super-think foam/posterboard at the dollar tree which I cut into thirds,
spray-painted black, and attached letters I'd cut out with my cricut 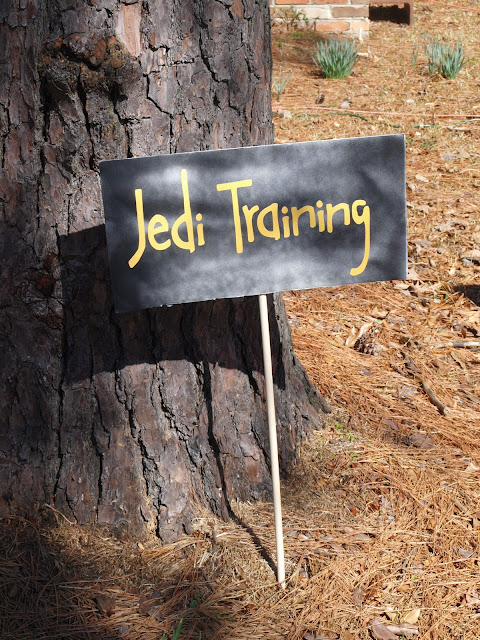 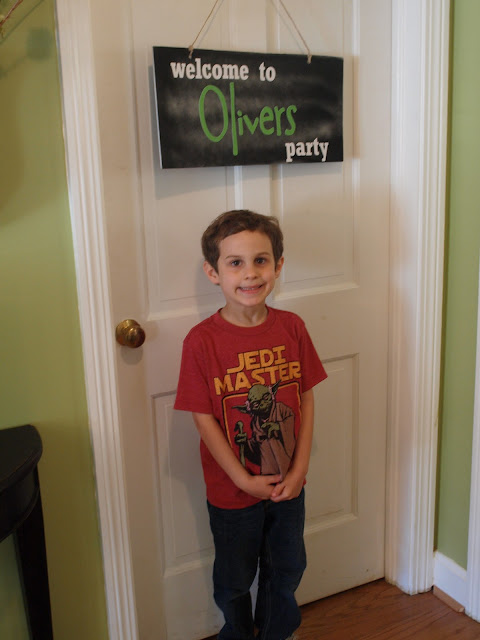 total cost for the signs = one buckaroo
(already had the black paint, cardstock, and glue stick I used to attach the letters)
6) printables in frames- 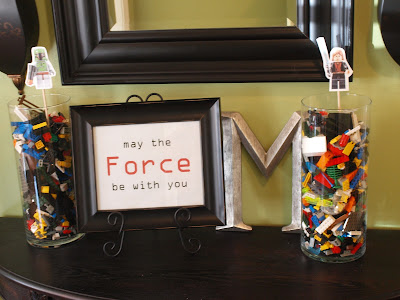 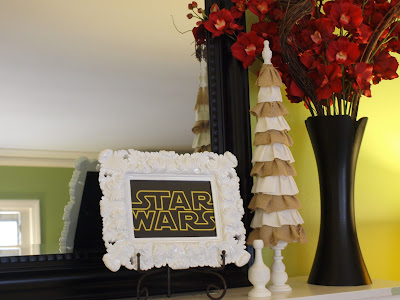 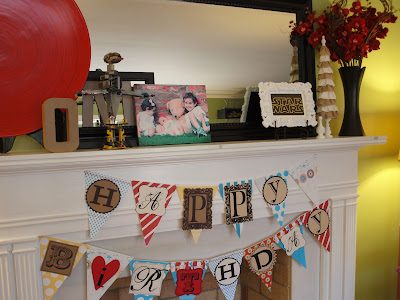 for the rest of the mantel, (after removing the Valentine decor) I added an 'O' for Oliver (already had that in my stash), one of the hubs Star Wars legos, my canvas people canvas of my 3 kiddos, and the Happy Birthday banner I made last year.
(all free free free)
7) treat bag tags- 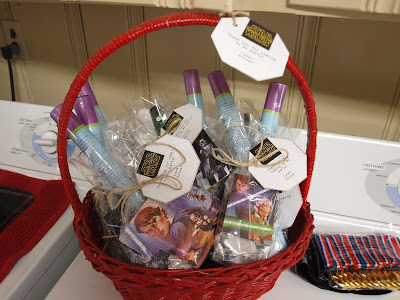 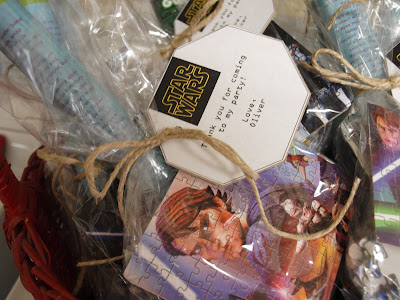 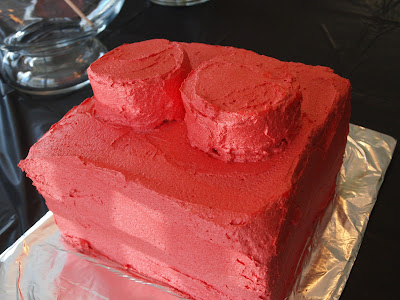 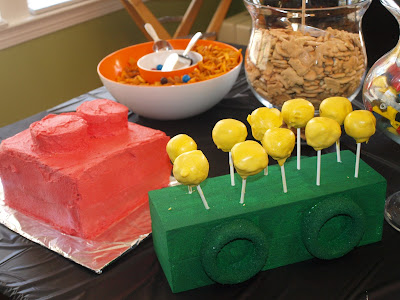 she even made these awesome styrofoam legos to stick the cake pops in.
Do you know about cake pops?
I've seen them all over blogland-
I asked Aunt C if she could make them, she found this book- 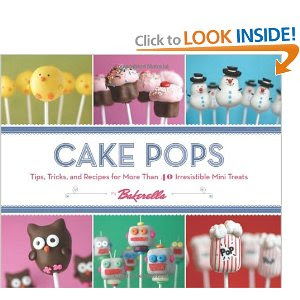 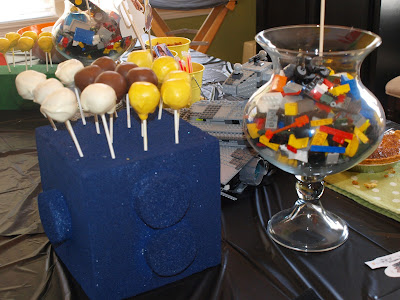 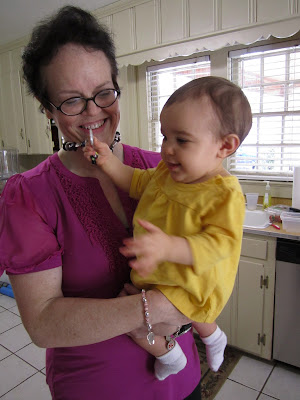 she also purchased the food-coloring pens that the kids (and a few grownups) used to decorate their cake pops.
Here's some of my mom's handywork- 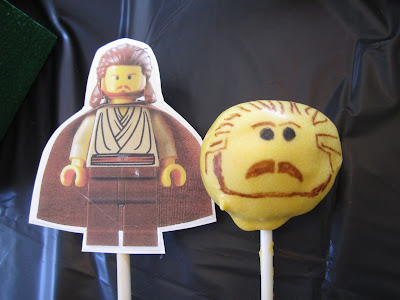 All in all, I think the hours spent on making + planning all of the aspects of a party like this at home definitely = one very happy little brandspankin new 6-year old.
So- that's how we like to roll around here at the Mathews.
Maybe you saw something you could use/adapt for a party you'll be throwing in the future?
Posted by Auntie Lolo at Friday, September 16, 2011